The BNP Paribas Open at Indian Wells continued its bid to be the most Tennis Hate-filled tournament of the 2013 season with the quarterfinal withdrawals of top seed and defending women's champ Victoria Azarenka and Samantha Stosur. Let's go to the (physio) tape: Azarenka throws in the towel after crying into it over injury withdrawal.

It's the latest weirdness to happen in a tournament that saw aging Aussie Lleyton Hewitt oust last year's finalist and 15th seed, American John Isner, and South African Kevin Anderson taking an hour and 55 minutes to kick the Spanish Bulldog and 4th seed David Ferrer to the curb.  Or to the cactus.  After all, it IS the California desert.

Azarenka was set to meet Caroline Wozniaki before she pulled out of the tournament with tendinitis and inflammation in her right foot and ankle.  It's a holdover from an injury she sustained in Dubai.  According to Sports Illustrated.com, the feisty, competitive Belarussian was seen hobbling around during her practice session and crying into a towel.

"I tried absolutely everything I could to do, but I have been advised by the doctor, by my own team, that it's just a very, very high risk already," she said.

Wozniaki will face Angelique Kerber, who's beaten her in their last three meet-ups. Stosur pulls calf, pulls out of Indian Wells. Sports Illustrated says it's only the second withdrawal in her career. Photo courtesy Getty Images.Stosur's withdrawal handed Maria Kirilenko a walkover and sets up a Kirilenko/Maria Sharapova semifinal.

If Sharapova wins, she bumps Azarenka out of the world number 2 position.

It's a shame.  Azarenka is unbeaten on the court so far this season, with a 17-0 streak that includes her second Grand Slam title at the Australian Open.

Stosur also realized the extent of her injury during practice.  In a statement, she said she "felt something go" in her right calf muscle while serving for the match against Mona Barthel.

"I had a bit of a rough start to the year and I feel like now my tennis has really picked up, and I've been playing really quite well these last few days," she said in a statement.  "I don't know if you can get any more unlucky than that." 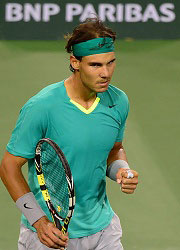 It FELT like a walkover: Nadal breezes past Federer in quarters, 63, 62. Photo courtesy of Getty Images.Unlucky is not the word to use for defending champ Roger Federer, who was felled by long-time rival Rafael Nadal in straight sets.  The word of the match, instead, is sloppy.  They say the most telling statistic in the men's game is the second serve percentage.  Federer won the point on his second serve a measly 29% of the time, compared to 52% for Rafa.  Mr. Bad Knees now has a 19-10 record against Mr. Bad Back.