The excitement around a Rafael Nadal-Roger Federer final feels so five years ago.  The match-up generating words like "blockbuster" is the one on Sunday at Monte Carlo between Nadal and world number one Novak Djokovic. He huffed and puffed and blew Tsonga's surge down. Rafa and his "champion luck" escape a 3rd set against Tsonga. Courtesy Getty Images.

It will be their 34th meeting (Nadal leads 19-14) and a re-match of last year's final, which Nadal won handily in straight sets.

Fed and Nadal have played fewer matches, just 29, but they're the stuff of awe and history.  Nineteen of those matches were finals, including the epic, twice-rain delayed 2008 Wimbledon championship match that Nadal won in the dark.

But those legendary Rafa-Rog moments appear to be waning.  Fed -- 31, a near-geezer in tennis terms -- lost to Nadal, 64, 62, in the quarterfinals at Indian Wells last month.  The quarters, Haters.  The last time they met that early was in 2004.  Fed is limiting his appearances more and more, nursing a back injury and being a dad. Nadal's own health problems derailed most of his 2012 season, but the 26-year-old is blazing a hot comeback trail.  He reached the finals last February in Vina del Mar, his first tournament back after a seven-month hiatus, and he hasn't looked back, winning Sao Paulo, Acapulso and Indian Wells, in which he captured his 600th career win and a record 22nd ATP World Tour Masters 1000 title.

Nadal's opponents must be puking in their bandanas.  His resiliance over all obstacles, on and off the court, is sickening.  Is he human?

One obstacle was Jo Wilfried-Tsonga in Saturday's semi-finals.  It appeared like JW was going down easy.  It took just one hour for Nadal to win the first set and serve for the match at 5-1. 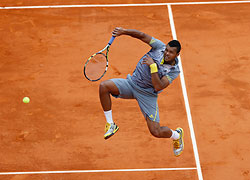 Tsonga levitates his game to force a 2nd set tie-break after being down, 5-1 to Nadal. He falls back to earth, losing tie-break. Courtesy Getty Images.Then, Tsonga must've had a "Holy merde, Je suis better than this" moment.  He got aggressive.  He served and volleyed.  And he broke back.  Then the French number one found the guts to drag himself back from a 0-40 deficit to hold his next service game.  He broke Nadal again to get back on serve, and forced a second set tie-break.

Tsonga may have saved 4 match points, but he couldn't save his technique.  His unforced errors -- 39 to Nadal's 12 -- cost him the tie-break and a chance to test Nadal in a third set.

Nadal conceded he had lost his concentration in the second set, already anticipating victory:

"When you are 5-1 and you feel that you didn't play a lot to be in that position, when the opponent feels that he's already lost, you know, he started to hit every ball, he passed playing very bad to play very well," he said.

"The top players are able to do that," he said.  "I remember the match between Stan [Wawrinka] and Roger [Federer] where Stan could have won, and Roger at the last minute just decided to go for it and hit the frame with his racquet and put the ball on the line, and then he won. So the best players often have that kind of luck."

I think it's a luck that comes with confidence and focus, something Tsonga didn't have against Nadal.  He was too busy hoping that Nadal's shots would go wide, rather than continue attacking Nadal and making sure his OWN shots were true.

I know that that moment I'm hoping my Worthy Opponent gets a double fault or nets a ball, I'm Hating my way right into the locker room.

There are no comments for this journal entry. To create a new comment, use the form below.
« Butthead: Bernard Tomic's Dad Suspended After Alleged Head-Butt of Partner | Main | Evidence of Tennis Hate #35 »
Copyright © 2022, I Hate Tennis. All rights reserved.